Here’s a recipe for fixing an authentic south Indian breakfast in less than an hour! Just like a few of my recent recipes, I have prepared this using my instant pot.

My recipe is a variation on the rice version. I am using Suji or more popularly called Rava in India.

Recipes for Rava idlis are not uncommon, but preparing them in a quick-fix way with instant pot is one you cannot find on very many sites.

There are a lot of store-bought options readily available in the market that requires you just to add water and steam.

However, nothing can beat the taste of authentic preservative-free, soft and fluffy homemade Rava Idli.

Most of my friends avoid preparing this dish altogether because of all the prep time involved.

Here’s how you can add this simple breakfast to your list. No more lengthy fermentation procedures or remembering rice-dal ratios.

Rava idlis are also different from rice idlis in that they are steamed along with the condiments, spices, and nuts.

The procedure is simple: you have to gather up the spices and saute them with your favorite nuts. I like using cashews for something like this. Almonds and peanuts are also good options.

Once you have your dough ready, it is a matter of minutes to steam them with the instant pot. Let me know if you have any questions about the settings in Instant Pot.

I have also added an Amazon link for the idli mold that comes in very handy for such recipes.

With this mix handy, you could prepare it ahead of time and only mix the wet ingredients right when needed. When ready to make them, just add curd, baking soda, salt, and water.

Dry Rava idli mix can be stored in a cool dry place for up to 3 weeks! Just check out the instructions list up to the third step and you have your Rava Idli Mix.

The Rava idli recipe can be prepared by adding ¼ teaspoon baking soda or Eno to the batter. Sometimes, I have skipped both of these, and the Rava Idlis still turned out to be very fluffy.

It is really up to you to suit to your preference but generally speaking, adding baking soda or fruit salt such as ENO rises the dough as it cooks and gives a fluffy texture.

The common recipe for Rava idli is not vegan. However, I made subtle changes to it and prepared it without using any dairy.

I used plant-based yogurt instead of the dairy version and could barely tell any difference.

Any kind of plant-based yogurt works. I had shared two different versions in the past. One with soy yogurt and one with coconut milk yogurt.

But again, it is not absolutely necessary to add any kind of curd or yogurt. If you don’t have any curd handy, you can still make Rava idli without curd. Just mix in 2 teaspoons of lemon and 1 teaspoon of fruit salt (ENO) powder.

Note: If you do not have an Instant Pot, you could still prepare these using an Idli steamer or any steam cooker. The cooking time does not change with a steam cooker (10 mins).

Just subscribe to my newsletter for more delicious vegan recipes such as this sent directly to your inbox.

Did you love this recipe? Rate it five stars!
And let me know what you loved about it in the comments. 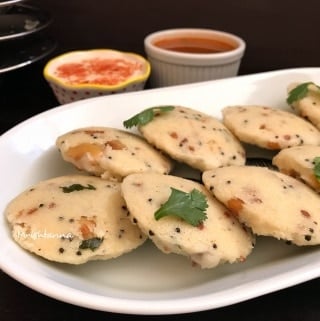 Prevent your screen from going dark

Nutritional information is an estimation only.

Pin this recipe for later use

I believe that cooking doesn't have to be complicated or expensive. I aim to show you that you can create delicious, healthy meals with simple, affordable ingredients. More about me